Now I know that the Bible says that Babylon is fallen in Revelations 18.

Revelation 18:1-3 After this I saw another angel coming down from heaven. He had great authority, and the earth was illuminated by his splendor. With a mighty voice he shouted:

For all the nations have drunk
the maddening wine of her adulteries.
The kings of the earth committed adultery with her,
and the merchants of the earth grew rich from her excessive luxuries.”

But in order for Babylon to fall, it must rise. And the time of its ascension is now, right before our eyes. As I said before, we must go to the origin of something to find out whether it is good or evil. Babylon began from the tower of Babel. Yes, it all began when they decided to build a tower to the sky and make a name for themselves (Genesis 11:1-4). Why? Because they feared the flood might strike again even though God promised with the sign of a rainbow that he will never destroy the earth again with a flood (Genesis 9:11-15). 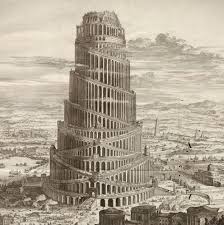 The beginning of Babylon sought to have a sense of independance from God. To be sustained apart from Him, much like todays world. Everyone is chasing something to replace God. Unfortunately, those people get into a trap because nothing can replace the Creator. Nothing in all creation can replace the Most High.

Then we fast forward to the time in Daniel 2 when King Nebuchadnezzar had a dream about a statue. Daniel not only told him the dream but also the interpretation. The statue had a head of gold, chest and arms of silver, belly and thighs of bronze, legs of iron and feet of iron and clay mixed. The interpretation was that the head of gold was Babylon which would only last until the next kingdom (represented by silver) would come and rule the land. The interpretation was that there were three kingdoms that would take over the Israelites land.

But here’s the strange thing that occurred, in Daniel 3, King Nebuchadnezzar ordered that a giant statue of pure gold be made and set up in the sight of all the people. When they made all times of music, everyone had to bow down and worship the image. What was the image? The image of pure gold represented the everlasting kigdom of Babylon! King Nebuchadnezzar completely ignored the warning that came via a dream which stated that his kingdom would soon end. Rather he ordered everyone to worship the illusion that the kingdom would last forever. Nebuchadnezzars actions were a purposeful disregard of Gods words!

This is the Babylon Rising! It is a direct attack on Gods word and His Holy Scriptures. Everything that is evil in this world is not a random shot in the dark but an intentional blasphemy against the Most High. Slowly but surely, lawlessness is spreading like wildfire and the church are accepting it with open arms. There are many things that the church are allowing in that is a direct attack against the scriptures. The modern day church is so ignorant of the bible that they dont even see the attack. Without knowledge, people perish and this is what is making the church so vulnerable to the seductive attacks of the world.

Be on your guard, do not be led astray by the imagery of Babylon. Do not be a part of them rather be apart from them.

2 Corinthians 6:17 Therefore, “Come out from them and be separate, says the Lord. Touch no unclean thing, and I will receive you.”
Be separate from the world, stick to the Word. Know the truth, spend time in the truth. Do not be led astray, our redemption is nearer now more than ever. Now is not the time to give up our faith rather it is the time to hold on to Jesus even more. Christ is coming soon. Remember the statue! A rock not made from human hands struck the statue and an everlasting Kingdom shall remain. The Kingdom of Christ is coming, now’s the time to choose a side. You can’t afford to sit on the fence. You can’t afford to be partakers of evil. Come out of Babylon and be separate!
Tagged #apocalypse#babylon#bible#christianity#church#endtimes#faith#god#history#jesus#life#religion#truth