I am not entirely qualified for this topic but I’m going to write about it anyway. I just feel that people are constantly making wrong decisions because it’s based on feelings instead of waiting on God.

It is clear that dating and courting are very different. They actually contradict each other. However, courting and godly dating could be synonymous  but I prefer to be old fashioned by calling it ‘courting’.

Whereas courting was always the norm, the term ‘dating’ derived from the year 1896.  Courting involved one partner and then marriage. Dating, however, involves hanging out with someone and then dumping them because they don’t seem to be the one and history is repeated.

It is a proven fact, that when you break up with someone, the more you want to see them and be with them. Ultimately, it was never intended for us to make relationships and break them…

There are many dates in a month but only one court in a district.

After the norm of dating had begun, divorce rates soared up 20 times over. That’s 2000%! Every Christian person that I met who is currently ‘dating’ someone have failed to answer this one question that I ask: Have you prayed before you started dating? 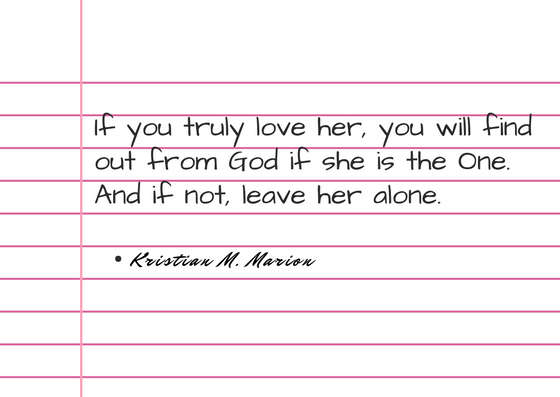 Courting is for people who are ready to be in a relationship and are looking for someone to spend the rest of their lives with. That someone, of course, must be a godly someone.

Dating is for those who want to have fun, waste people’s time and end up damaging themselves and hurting others. (In my next post ‘Soul Ties‘, I will explain how).

So what’s so special about courting? Courting involves your parents…

Yes! Who can give you better godly advice than your parents? Why not invite her for lunch at your home so that your parents can meet her? Why not go for supper at his house to meet his parents? Many times, a couple will reveal their spouse when they have already proposed marriage and the parents literally hate them. And by then, it would be too late. You end up spending the rest of your life with a monster-in-law.

What’s wrong with going on the first date with an adult? If you want to go alone, what are your intentions?

A lot of people are going into relationships without even praying about it. And when it doesn’t work out, they blame God! Unreal!

When I was in school I made sure I never get entangled in a relationship at such a young age. Even when a girl asked me to the matric dance (prom) I still said no. That’s a bit religious I guess. What’s even worse was that I didn’t have transport to the venue and so that same girl gave me a lift to the dance. With. Her. Partner!

I can’t believe I’m doing this but here are some tips on relationships:

To make up or not to make up?

Should Christian women wear makeup or not? I might end up single for the rest of my life saying this but I have to tell the truth. According to the Bible, the only person who wore makeup was Jezebel (2 Kings 9:30). To say that Jezebel was a bad person would be an understatement. She was a feminist witch.

Likewise, I want the women to adornthemselves with respectable apparel, withmodesty, and with self-control, not with braided hair or gold or pearls or expensive clothes,

As you can see, theologically, women shouldn’t really wear makeup.

But let’s use logic….

While you are single…

A guy will look at you and the makeup will stimulate an attraction because of the bright colours. Ladies, do you really want a guy who loves the way you look by anatomy? Or do you want him to love you by who you are?

While you are married…

There’s no reason to wear makeup when you are married because your husband loves you for who you are….unless you are trying to attract attention from other men?????

In conclusion, makeup does harm to your face. And you have to keep using it to ‘look good’. So be happy with the way God made you….

So hypothetically speaking, if I like a girl. I will pray about it. If God gives me the ‘go ahead’, I will not even go to her. I will go to her father or mother. I will tell them that I am interested in their daughter. I will then ask if I could have lunch with them. Then on the day, while eating with them, I will be interrogated by the parents and they will eventually know everything about me. (Including the daughter).

And then I will leave. I will not say a word to her. Her parents will…..